USE CONDOMS IF YOU MUST HAVE SEX-YOUTHS TOLD

Youths within Njinikom sub division in Boyo division have been given some 700 condoms and sanitary pads as part of measures to discourage teenage pregnancies, school drop outs amongst young girls as well as adopt healthy hygienic conditions during their menstrual periods. This was august 27 at the Njinikom municipal stadium during the finals of the fourth edition of Mayor Terence Chah Bam, mayor of Njinikom council. 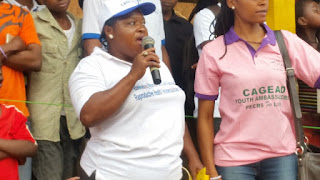 The grand finals in Njinikom, marking the close of the over two months of active sports amongst the youth of the area was emotalised in football in female and male categories. Dominated by the Balikumato quarter, the Balikumato ladies defeated their Atuilah counterparts3-0 to lift the trophy, while the same Balikumato boys urged the grave diggers of Bochain to back home the trophy in the male category. speaking at the ceremony, sponsored largely by the Cameroons leading brewery industry, les Brasseries du Cameroun, cup donor, mayor Terence Chah Bam thanked the youths of his municipality for their maturity demonstrated throughout the tournament and enjoined them to uphold virtue and not vice”as you return to school, work hard as you have shown in this tournament and you shall reap the fruits of your labour” he said. 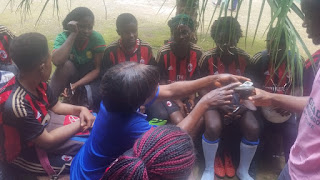 The occasion in Njinikom, was an opportunity for Some 700 youths to receive contraceptives in form of condoms and sanitary pads from the officials of the Center for Advocacy in Gender equality and action for development, CAGEAD. They queue up at the stand to be served condoms, male and female, sanitary pads and with knowledge on contraceptives,one on one discusions,demonstration on healthy use of emergency contraceptive tools like the male and the female condoms and presentation of artificial reproductive organs,both male and female. Distributed as part of activities to end the fourth edition of the mayors annual summer tournament for the youth of the municipality, it has been described by many, as a worthwhile venture, most especially in a community where condoms use and function still remains a myth especially with the effective presence of the church and sex education a taboo subject in most homes,stigmatisation of buying a condom,HIV statistics on the rise,classroom teachers still teach issues os sex from an academic background, hence resulting in unwanted pregnancies, HIV/AIDS transmition and sexually transmitted diseases and SDTs 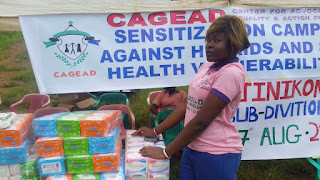 According to clotilda Andiensa, CAGEAD coordinator, the action to distribute for free, the condoms and sanitary pads in Njinikom, was timely and fall within the associations objectives.” CAGEAD works to support women and youths. it has as major component, reproductive health education especially, adolescent reproductive health education. We came to Njinikom by choice. we work with the Njinikom council and n the advent of the mayors tournament, we saw it as an opportunity that will bring together so many young boys and girls. Njinikom like eels where still suffers from HIV new infections, female school drop outs because of teenage pregnancies. 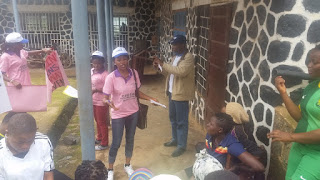 We could not have stayed quiet and CAGEAD has its roots from Njinikom and we could not have stated this campaign from somewhere else” she said. On why the particular interest on condoms, clotilda Andiensa, and sound says it’s just an emergency measure.” We are not promoting them to engage into sexual activities but from statistics we have and from what we are observing, it shows that youths today greatly indulge into sex. We also realized that there has been much talk on abstinence and we know that many others do not abstain, so we came for those who cannot abstain. If you can’t abstain, use condom” said CAGEAD coordinator. 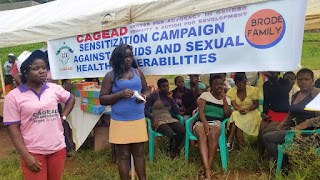 CAGEAD volunteers like Eric Mbotiji, Ruth Mbel, Geraldine Neng and Juliet Miami, said working with the youths especially on issues of sexuality is very rewording and interesting.” we want to tell our youth to make informed choices, they need to stay healthy, they need to use these emergency contraceptives. We are in school and we came here to encourage them not to have unwanted pregnancies, for they will make them drop out of school. They hardly use the condoms .some do not even know how to use it. They need to watch against STDs like clymedia which can make them barren for life. They said.to sandra Titi,team captain of Atuilah female team,taking home a saniatary pad will save here the ordeal of buying one and shall have the luxury of using it.coming at a the time schools are opening their doors,CAGEAD authorities believe the pads shall keep most girls at school,bridge the poverty gape for those who cant aford one and better prepares them phsychologically for school. 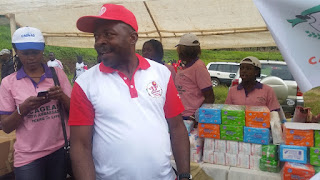 The mayor Terence Chah Bams tournament in Njinikom which was in its 4th edition was sponsored by les Brasseries du Cameroun.
Posted by Unknown at 04:33